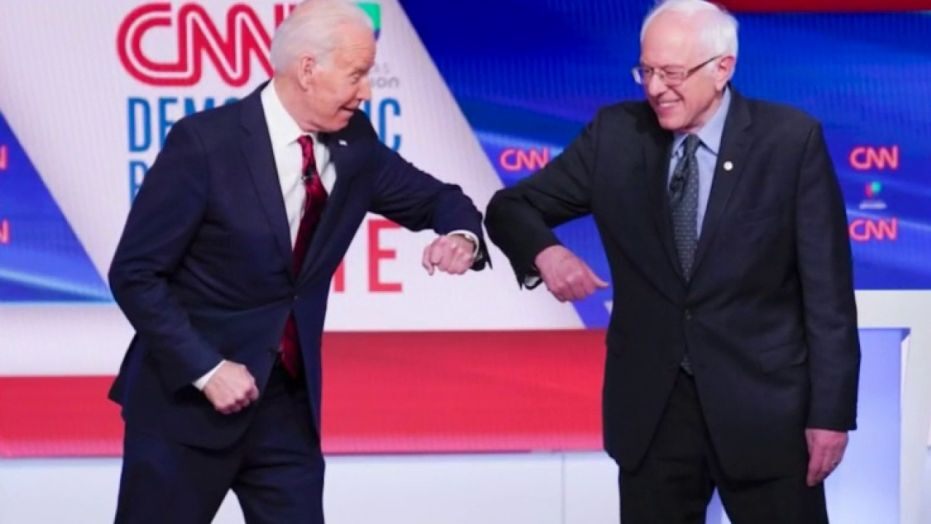 While starting a debate focused on the coronavirus by coughing wasn’t the best move by former Vice President Joe Biden, he employed the right strategy in his first one-on-one matchup against Sen. Bernie Sanders on Sunday night, making it about solutions versus a revolution.

Biden addressed the coronavirus crisis and every topic discussed with real answers to the existing challenges we face today. In contrast, Sanders missed the mark by relying on his stump speech about a revolution to change health care and other important aspects of American society.

With a very strong performance, Biden was the clear winner of the debate between the Democratic presidential candidates.

Yes, many headlines will focus on the commitment Biden made to select a woman as his vice presidential running mate. He also made news by committing to put an African-American woman on the Supreme Court if he becomes president.

But it was the stark contrast between Biden and Sanders, and by extension with President Trump, that really mattered in the debate.

Biden’s pledges on female appointments were meaningful historically and politically. It was also smart to make sure there was a headline or two, in case the evening didn’t go well. But Biden not only made news – he delivered a great performance as well.

The former vice president provided specifics throughout the debate – whether it was calling for dealing with the worsening coronavirus crisis by adding more hospital beds or deploying the military to assist the emergency response. He showed he knew what to do about the pandemic, as well as a range of other topics.

Rarely did Sanders tackle a problem head-on with a solution. Instead, he leaned on his well-worn campaign rhetoric or parts of his record – especially his oft-repeated desire to reform the health care system with “Medicare-for-all.”

In contrast, Biden did an especially good job defending the Obama administration bailouts that saved the economy and prevented the Great Recession from becoming a depression. He pointed out that many of the very people who Sanders constantly claims to represent – blue-collar workers, small-business owners, and hourly wage earners – would have been hurt the most if Sanders had his way and thwarted the bailout.

The context of this debate was clear before it started. Biden is the presumptive Democratic nominee with what looks like an insurmountable delegate lead. He is expected to defeat Sanders in upcoming primaries and clinch the party’s presidential nomination.

In this first and perhaps only one-one-one Sanders-Biden debate (if Sanders ends his campaign early) Sanders tried to get commitments from Biden to support his policies and move to the left.

Sanders foreshadowed his strategy in remarks he made in the wake of his losses last Tuesday in a string of primaries.

But Biden preempted Sanders by announcing before the debate he supported free public college tuition for any family with an income less than $125,000.

Looking ahead to the November election, each candidate pledged to support and campaign for the other if his competitor becomes the Democratic presidential nominee.

Sanders likes Biden, which will advance efforts at party unity. Biden has always treated Sanders well from the day Sanders walked into the Senate.

This also made for a much better debate and allowed viewers to focus on the stark policy differences between the two candidates.

Holding a debate focused on the coronavirus without an audience was the best idea of the night.  It allowed everyone to see how Sanders, Biden and Trump are reacting to the pandemic.

Add to this Biden’s strong, aggressive performance throughout and that made him the clear winner.

From his experience in the Obama White House and long Senate service, Biden repeatedly offered specific details about how to tackle problems, pointing to his previous experience doing the same and showing voters he could get the job done.

In one exchange Biden got right to the point by focusing on “Medicare-for-all” and the coronavirus, showing viewers that proselytizing for single-payer government health insurance isn’t the answer.

Biden repeatedly stated that now isn’t the time for a revolution because we need to solve problems immediately. Then he pointed to the fact that Sanders still hasn’t said how much “Medicare-for-all” would cost.

Biden really hit his stride talking about BidenCare building on ObamaCare to tackle health care and the coronavirus pandemic, and reminding viewers in a very personal way about his own experience with health care crises. His first wife and daughter died in a car accident in 1972 and his son Beau died in 2015 of brain cancer.

The former vice president noted that most people want to have hope when faced with a health crisis.

Biden put it all together on a night when our country is facing one of its biggest challenges in the coronavirus pandemic. If he can continue to perform during the next eight months the way he did Sunday night then Trump will have an even bigger challenge on his hands to stay in the White House.

With what seems to be an insurmountable delegate hill to climb, Sanders entered the debate looking like the loser in the nomination race. So Sanders’ strategy in the debate was to get Biden to move to the left and endorse Sanders’ proposals about health care, climate change, immigration and other issues.

But Sanders failed to push Biden as far left as the senator from Vermont would have liked. In addition, Sanders hesitancy to commit to picking a woman running mate gave us a window into him and his campaign that wasn’t a winning look.

Sanders was effective when he reminded viewers of votes Biden has taken in the past that don’t look good today.

As a senator in 1996, Biden voted for the Defense of Marriage Act, which barred the federal government from recognizing same-sex unions for the purpose of federal benefits. Also as a senator, he voted in 2002 to give President George W. Bush the right to take military action against Iraq, voted for the Hyde Amendment that barred the use of federal funds to pay for abortions except to save the life of the woman or if the pregnancy was a result of rape or incest, and voted for legislation that made it harder to declare bankruptcy.

Sanders voted against all the above measures and sought to use the old votes against Biden in their debate Sunday night.

But even that effort failed when Biden hit back by reminding everyone that Sanders voted against the Brady Act gun control legislation five times and voted to give gun manufacturers protection from lawsuits.

Furthermore, Sanders never answered Biden’s question about why he voted against sanctions on Russia for interfering in our 2016 presidential election.

While Sanders may have won some points in these exchanges he lost the debate.

Finally, Sanders at one point lectured Biden that Biden would be a weak candidate against Trump because he couldn’t muster the enthusiasm of voters. Biden punctured that argument by noting he increased turnout and broke records in the primaries while Sanders outspent him more than two-to-one in some contests.

Sanders knows he won’t be the nominee and you could see it in his debate performance. That doesn’t mean he won’t keep trying to get Biden onboard with his positions. But Sanders is unlikely to have any more luck with that in the future.